The packaging use of the PET shows lately a significant increase in the use of recycled PET for food, beverage and cleaning products.

As a result of a reaction between terephthalic acid (1,4-benzoldicarboxylic acid, C6H4 (COOH) 2, para-dicarboxyl-benzene) and ethylene glycol (ethane 1,2-diol, HOCH2CH2OH), the PET or Polyethylene terephthalate being one of the most used thermoplastics.

Developed in the beginning of the 1940’s, it is widely used in the packaging and fibers (for weaving) industries.
One of the well-known advantages of the thermoplastics is its recyclability, being one of the main features that turned the PET so popular once it can be reprocessed several times.
This wide and popular use of the PET-packaged products, mainly beverages, started in the early 1970’s but the recycling processes started in the following decade in the USA and Canada.
In developing countries, like Brazil, Chile and Argentina, a more intensive use of PET began in the late 1980’s, and initially it was mainly used to replace glass bottles and other glass containers that were commonly used by the beverage and food industries.

The industry initially saw in the pet containers as a non-returnable, cheaper, lighter, more versatile and without any need for maintenance or losses replacement, almost unbreakable, bringing down the packaging costs for products that have a low sale price, so turning those products more profitable, but no one cared about the proper disposal at the time.

On the other hand, for consumers, the practicality of immediate disposal after consumption, with no need to save and return the containers for the next purchase, associated with lower prices also made the PET bottled liquids more attractive.

Currently more than 70% of the PET production is directed to the bottled beverage industry, that reaches approximately 1 million bottles made every minute around the world.
Global PET resin production capacity was 27.8 million tons in 2015, worth almost US$ 24 billion.
China leads this production with 27% of the market share, then Europe and North America come in second place with 17% of the Global production each. China is not only the largest producer of PET resin but also the largest consumer of PET bottles. In terms of region, Asia is the leading region in the production of Polyethylene Terephthalate (PET) resin with a market share of approximately 50% in 2015.

Worldwide, fewer than 50% of the PET produced is recycled, even though there are some success cases where the PET recycling reaches almost 59% (Brazil, one of the top countries in PET recycling), this is a number higher than the US and China, but close to the recycling numbers in European countries, where recycling is more professionalized.
Regarding the use of the recycled PET, an article written by Antonio Silvio Hendges on the website www.ecodebate.com.br, posted on 02/11/2014 says (translated from Portuguese):

The main consumer of recycled PET is the textile industry with 38.2%, the industries of unsaturated and alkyd resins with 23.9% and packaging with 18.3%. In the textile industry, PET recycling is used in the manufacture of clothing, pillows, blankets, duvets, stuffed animals, carpets, rugs and sports materials. The resins are turned into brooms, rope ropes, water boxes, swimming pools, taps, pipes and fittings, sinks, countertops and adhesive tapes. The automobile industry also uses these resins in the manufacture of coatings, bumpers, aerodynamic elements, benches in collective transports, fairings, as well as road signs for highways and railways such as signs, lights and direction indicators. Cell phones and other electronics also have recycled PET in their structures.

The packaging use of the PET shows lately a significant increase in the use of recycled PET for food, beverage and cleaning products. While the use for cleaning products has no limitation, to be used as a food / beverage packaging the recycled PET needs to use one of the new technologies – Super Clean and Bottle to Bottle – which are able to decontaminate PET after recycled for human consumption – PET-PCR, independent its previous use and the collection systems used for the recycling. 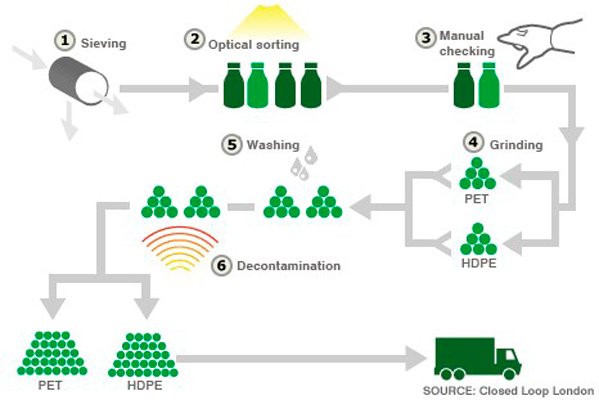 The recycling steps are:

COLLECTION:
Either from segregated recycling garbage collection or curbside collection the use PET packages (bottles and other types of packages) arrive at an initial storage room, to feed the rest of the process.

To reduce the contaminants brought on the PET packages it is necessary to use a sieving – prewashing stage where most of the major contaminants are separated.
There are paper screens plus card screens for paper and card separation.
On this phase ferrous metals are also separated.
On some systems there is also the Eddy Current Separator for separating the aluminum scrapes / cans.

There are two main types of sorting:
Manual and Automatic. The manual is mostly focused on caps, labels and bottom cups, while the automatic is mostly focused in color separation.
Not only color sorting, but also removing labels and many other items that are physically attached to the PET bottle or containers that will require further processing for their removal.
These items include the bottom plastic cups (many carbonated beverage bottles have it, known as base cups), as well as labels and caps.
The Manual checking is then performed after the automatic sorting, so to guarantee the quality of the recycled product.

NOTE:
Sometimes, the primary collection stores the material in a storage facility that presses the material together to form bales, then sends it to a processing facility. The following operations can also be performed on the receiving / storage facility, sending the baled material already prewashed and free of caps, bottom cups and labels.

In the reclaiming facility (or conversion facility as it is also called) the bundled material is thrown into shredders, transforming it in small flakes, that will now be washed and go through other sorting processes that separate PET and HDPE creating two streams for the next stages.

After grinded and separated the flakes are submitted to a washing process, by means of chemicals and water sprayed over a bed of flakes, then creating a flow of flakes densely conditioned in water and finally submitting the flakes to swirling movements, to have it the cleanest possible before sending them to the next stage.
Once separated there will be two streams of material for the next stage.

The bigger reclaim facilities have a pelletization process before sending the material to the storage and transfer.
Basically it is heated, extruded, and pelletized to form a new pelletized resin.
Some reclaiming facilities do not have this stage, so the material is stored and transferred in the flake stage.

Once the material went through all the above stages, the material, either PET or HDPE, will be stored in proper place, normally a silo, to be transferred to trucks and then sent to the transforming industry.

As there is a strong unbalance on where the recycled material could be used and where it is generated, there is the need to transfer this material for long distances, and this is where the packaging industry comes in one more time.
On this last stage it is even more important to keep costs down than on the others, so in the past, the resin was transferred in 50 kg sacks, then bulk carrier trucks, then big bags were used, but currently the best option for this phase is the bulk container dry liner, which can present many advantages.
One is the lower cost: the cost could have an up to 70% cut on costs from the cost of 50 kg bags process.
Another advantage is the packaging time and labor, that not only reduces the cost for using less labor but also for using less standing capital asthe time this process uses the transfer equipment is a lot lower.
It also reduces the number of transfers, the hygiene of the pellets and so on.
Using bulk liners to carry pellets is the most efficient way.

As the PET pelleted resin has a bulk density of about 0.85 to 0.88, a 20’ container that has a 33 cu.m volume can accommodate up to 26 metric tons of PET pellets, the cost gains over big bags will be up to 70% of packaging costs from 50 kg sacks.
There is always the possibility of using a multi-way liner when the trips are not too long, and doing so reduces even more the cost, once the labor to install / uninstall plus the cost of the liner itself can be diluted on more trips. 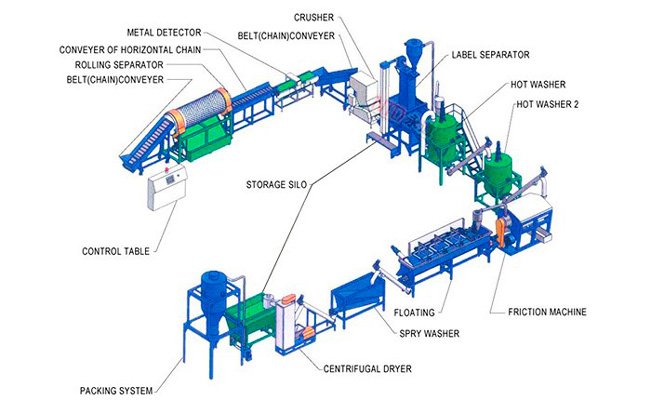 Is it time to transport your PET with container liners. Let us help you decide on the best liner!