One extreme case of a client that was losing too much time because of an inefficient hard-to- flow bulk solids unloading operation and how this operation should be improved also makes part of this post.

As we started to discuss last week, the hard-to-flow bulk solids, need always some external help to be loaded or unloaded, consuming more energy and efforts than the regular flowing products. There are similar difficulties between loading and unloading hard-to-flow products, so, it is somehow expected that the solutions would be similar for both operations too.

Some bulk solid products are not “born” hard to flow exactly, but, while they are transferred from the supplier to the buyer by shipping in containers, there may be several different logistics operations that leads the containers to be left waiting for transfers for many days, or it is transported by sea for several days, then waits for customs clearance, and so on.

Just as a curiosity, a container carried from China to Brazil and vice-versa, will cycle (we can call cycling the complete yaw movement from one side to the other that a ship does while in movement) approximately one million times (1,000,000), while it takes up to thirty five (35) days “en route” plus ten (10) to fifteen (15) days for customs clearance, plus, sometimes, seven more days of internal travel until it reaches the final destination.

All this movement (ship cycles, truck travels, etc.), plus the fifteen or more waiting days, brings a phenomenon called compaction, (with some lumps of consolidation sometimes) to some products that originally were not hard to flow.

Some normal flow products become hard-to-flow bulk solids, and some that were already hard-to-flow, get still more compacted while traveling or waiting, increasing the difficulties of moving those products out of the container at destination.

This creates a new range of problems to be solved, but, before we “solve” them let us discuss a little further about these phenomena.

We’ve started discussing the loading difficulties for the hard-to-flow bulk solids, but we have a new question:

What about Unloading hard-to-flow products?

Before answering this question, we will use this article to deepen a little more in some concepts and theories that can give us more support in understanding the hard-to-flow bulk solids moving phenomena.

Only recently it has been recognized that the overall properties of dry granular media has a strong dependency on some of each individual mechanical characteristics of the constituents of the material.

Behaviors as vibration-induced fluidization, compaction – decompaction, blockages by arching, and various types of flows under the effect of external stimuli, can be intrinsically related to the mechanical interactions between the particles, in an almost microscopic level, not only between the particles themselves but also the interactions with the walls of the place where the bulk solids are contained, or, more specifically in our case, the container (liner, once it covers the walls).

The different modes of energy dissipation in the microscopic level is what determines how granular or bulk solids materials flow behave, meaning that the physics of interactions between two solid particles when in motion is far from being completely known, but we can still understand a lot of concepts and results.

When we first started the previous article about the hard-to-flow bulk solids, we brought up some concepts that are still useful even though we are now talking about the unloading of the bulk solids material. One of these concept is related to the definition of the hard-to-flow solids.
We used on the first article a concept relating the difficulty to flow with the fluidization capability
by blowing some gas on the bulk solid.

This, gas blowing through the bulk solids make the gas flow between the particles levitate and separate part of it, reducing the interactions between particles, so changing the parameters they are governed by.

As it is always difficult to describe interactions between solids, mainly because we are not talking about some homogeneous, smoothly shaped particles, but about particles that sometimes are crooked, with porosities and that in the microscopic level may or may not touch evenly the other particles, lacking homogeneity and a defined shape, so, the best way to deal with the problem would be a computational approach. But after isolating the most significant interactions, using some of the equations derived from these relationships to create simpler approaches based on the average or modal properties of the materials, we see that it is possible to do things a little easier, and this is what lead us to:

Obviously, as our time and space are very limited, we will discuss these things conceptually, discussing over informative models, starting with some basic laws of physics:

What are The main Laws of Friction (between two solid bodies)?

Even though we are dealing with leading microscopic phenomena, from experience we know that the “macroscopic” laws, for either static and dynamic friction between two bodies, are mostly applicable, and are based mostly on experiments. They are somehow simple and have been out for a long time, what proves that they are very close to reality.
For almost five centuries they have not changed much, and the only changes that we have seen were because of instruments improvement, but conceptually they are the same since the early 1500’s.

From Leonardo da Vinci to Guillaume d’Amontons theory and experiments, the La Hire confirmation of the properties and laws or to, in 1750, Euler’s introduction of the concepts leading to identify the difference between static and dynamic friction, things have change very little and these properties and concepts can be summarized and presented by a very simple set of three fundamental laws, even though they were dealing with macroscopic bodies, they are very well applicable to the microscopic interactions that occur inside a bulk solid.

The Three Fundamental Laws of Solid Friction were depicted from classic experiments that led to the following conclusions:

Where T = force to move the body; µ = Friction Coefficient and P1 , P2, Pn are weights

No scientist could claim to have created – invented – discovered or even written all three laws, but it is normally used as a reference for this whole set of laws as being the “Coulomb’s laws”, because he was the one who made some of the first uses of them in some very important article about properties of granular bulk solid materials, being one of the most frequently cited references in this field. We will also use this nomenclature for the laws, but he is still not the sole author of them.

One thing that we should note about the coefficients of friction is that they depend very little on the nature of materials in contact. For instance, the coefficient µ is about 0.1 for friction between metals, 0.7 in the case of rocks, and 0.4 for paper. An explanation could be given for this, but we will leave it for other coming articles.

After all the above said, what we can state as the most important are that:

What External Forces are those?

The most common thing that one could do to unload a hard to flow bulk solids, would just be to increase the tilting angle of the container. This is energy to be applied to the whole system, this means high costs in terms of installed equipment, limitations in terms of how many unloads could be made at the same time and so on, all generating higher supply chain costs.
There would be other ways too, a lot less efficient and maybe as expensive as tilting the container to a higher angle, but this is the point where we come to present our solution.

What Solution Bulk-Flow then brings to the table?

If fluidizing the product to help it settle more evenly and increase the speed of distributing the products inside a container is a very good answer to that problem, this is an even better answer to this one we are talking about.
Imagine that the bulk solids product was kept for almost 60 days, was cycled a million times, received an increased amount of moisture due to the ocean trip, was vibrated and left settling.
The product, was it hard-to-flow or easy-to-flow, it will be more compacted and then moredifficult to unload.

There are cases that the product is in such a compaction mode that it is almost like a block.
We saw cases where the chemical product was so compacted that the containers needed to be tilted beyond de 60 degrees and then the product movement was started so suddenly that it formed vacuum behind the block ripping the whole bulk container liner, bringing it to the discharge hopper and mixing it to the product storage silo, to such a point that the plant had to be locked down while the pieces of the liner were picked out to avoid the product contamination.
There was an extreme case where the vacuum deformed permanently the container generating a lot of supply chain higher costs.
To avoid all these risks and hazards what Bulk-Flow proposes is the use of a FLUIDIZING LINER 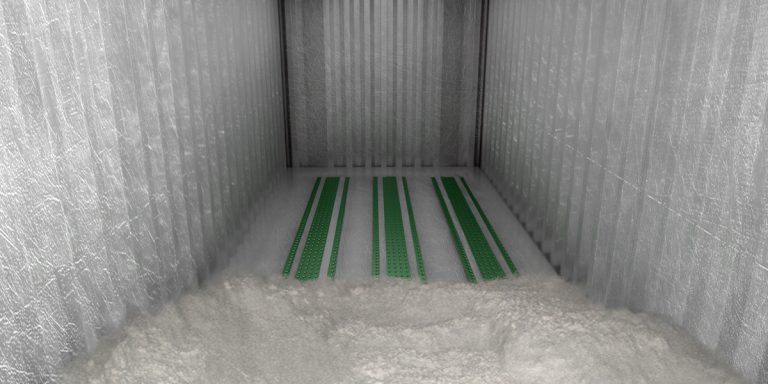 With the use of a fluidizing liner our customers could reduce their supply chain costs by reducing the hazards and risks involved in such situations, as well as reducing the load time, as we mentioned in our first article, or reducing significantly the unload time.
These are the main features of our FLUIDIZING CONTAINER BULK LINERS:

NON-OBTRUSIVE FLUIDIZING SYSTEM – The flat patented design works to avoid the obstructions of protruding air hoses typically used in other fluidizing systems. In addition, unlike systems that utilize air hoses, which are frequently dragged during discharge, BULK-FLOW’s flat fluidizing system remains in place from start to finish.

Not requiring air hoses and, therefore, there is no obstruction of the airflow, so helping the operation and reducing the total supply chain costs with SUPERIOR EFFECTIVENESS.